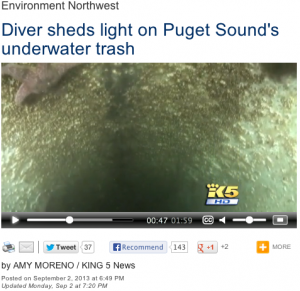 SEATTLE — With a big, late-summer storm expected to bring occasional downpours and localized flooding tomorrow (Thursday) and Friday, builders are being asked to inspect and maintain storm drain “socks.”

“The predicted weather system will not be huge by winter storm season standards, but for a time of the year that is normally dry it will be powerful,” Seattle Public Utilities (SPU) meteorologist James Rufo-Hill said.

Related to the same weather pattern that brought strong thunderstorms to the area last week and record humidity last month, the storm comes at the height of Seattle’s construction season. Seattle’s Department of Planning and Development (DPD) is reminding builders working in the city to inspect and maintain any temporary storm drain inserts they have installed as part of construction projects.

The inserts, also known as storm drain socks, are used on many construction projects to catch sediment not captured upstream by other construction-related erosion control devices. Regulations for the use of the socks include the following:

Rules for the use of the socks are available at DPD’s website at: http://www.seattle.gov/dpd/Publications/Forms/Building_Permit/  (see Construction Stormwater Control and Soil Amendment Standard Plan).

Here’s what Seattle residents can do to prepare for heavy rainstorms:

One tool that can be used to track locally intense rainfall is Seattle RainWatch. Designed by the University of Washington’s Atmospheric Sciences Department for Seattle Public Utilities, the innovative web-based system provides neighborhood-level views of radar imagery, rainfall accumulation and short-term rainfall forecasts. 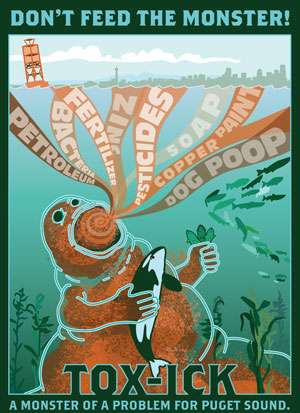 Sustainable West Seattle will be giving its “Don’t Feed the Tox-Ick Monster” presentation at Pathfinder K-8 School Monday, Oct. 10 from 7-8 p.m. and is challenging Pathfinder to bring a crowd.

The challenge: If 40 or more adults show up to learn about protecting Puget Sound, then Sustainable West Seattle will donate $1,000 toward the school’s Earth Project. To help encourage turnout even further, free pizza will be provided. Pathfinder K-8 School is located at 1901 SW Genesee St.

Pathfinder K-8 School’s Earth Project aims to “empower students to discover their connections to the Earth, themselves, and one another” and is a collaboration between Pathfinder and the Nature Consortium — a nonprofit organization also based in West Seattle.

The School Garden is the most significant part of the Earth Project and has become an integral component of many of Pathfinder’s classrooms.  The garden affords opportunities to teach students about natural resources and healthy food. The rainwater harvesting system will help teachers educate students about the importance of conservation and the water cycle.

“This is a great opportunity to advance the school’s efforts to teach students about healthy foods and ecology,” said Bill Reiswig, parent of a Pathfinder student and a founder of Sustainable West Seattle. “All people have to do is show up for an hour and the school will get a gift toward a rainwater harvesting system. We’re trying hard to get the word out so that 40-plus adult community members show up.”

All West Seattle community members are invited to attend the hour-long event and enjoy free pizza. Sustainable West Seattle’s presentation will focus on actions each of us can commit to that help protect and restore Puget Sound. Audience members will learn about things like natural yard care, water retention systems, community volunteer opportunities, and more.  To learn more about the project, visit tox-ick.org.

Make this event more meaningful to you and help us make it more successful, efficient and smooth. Sing up and volunteer for the Festival day.

There is a wide array of volunteer opportunities and most of the shifts are short (2 hours) but feel free to sign up for more than one shift (you shall receive a prize if you do!).

Check out the different ways you can help and sign up using this link  to Volunteer Link’s website (you have to sign up for a free account as part of the process) http://bit.ly/oPRYVd. END_OF_DOCUMENT_TOKEN_TO_BE_REPLACED

Sustainable West Seattle is one of the participants and we’ll be helping set up the festival from 9:00 am that morning and will be tabling and helping out when the Festival kicks into gear at noon through 6:00 pm.

Sign up for the Walk, Bike and Paddle events on Brown Paper Tickers.  This is a special 9:00 am event which begins at Seacrest Park in West Seattle’s Alki neighborhood.  You can walk, bike, kayak or standup paddle from Seacrest down the Duwamish Waterway to the Waterway Park.

The festival is free and will include live music, free lunch, kids activities, interactive booths,kayak and boat rides and more! Arrive in Seattle style and walk, bike, or paddle to the annual festival. Walk/bike/paddle participants receive an event shirt, a refillable water bottle, and a map at the start. Buttons will also be given at the Walk/Bike/Paddle finish line.

The Duwamish River Festival has been a summer favorite event in South Seattle since 2005, attracting hundreds of people each year.

Seattle’s Duwamish River is listed by the Environmental Protection Agency (EPA) as a Superfund Site – one of our nation’s most toxic rivers.  The Duwamish River Festival is one way that the Duwamish River Cleanup Coalition/TAG ensures that River communities can learn about and comment on the River cleanup.

This year’s festival will feature updates on the Duwamish River Superfund cleanup, children’s art activities, kayak and boat tours of the river, local live entertainment and artwork, boat rides, free food, environmental health information, Bert the Salmon, healthy yard care, and more. Attendance is expected to be between 750-1,000 people throughout the day.

Join the Rain Water Walking Tour to learn local watershed and ecosystem basics.  People for Puget Sound is hosting this walk, which begins at the Home Depot parking lot –  7345 Delridge Way SW, at 10:00 am on Saturday, August 13.  The walk is co-sponsored by Sustainable West Seattle, Stewardship Partners, and the City of Seattle.

At the beginning of the tour you will learn about the ecology of the Longfellow Creek watershed, traditional polluted runoff management methods, and the effect of polluted runoff on local fish habitat.

The tour will then follow the legacy trail along Longfellow Creek, up 150 stairs, to the High Point neighborhood to view sustainable development solutions to polluted runoff. An optional discussion will conclude the event from 1:00 to 2:00 pm  at the High Point Community Center.

The tour is free and family friendly. Please wear comfortable shoes. This is an interactive walking tour. There are only 30 spots available so RSVP to Emily Fales at EMfales@uw.edu.  For more information call Franziska McKay at 206-382-7007, extension 161.

Join Sustainable Seattle and Alleycat Acres in digging the first rain garden in the Russell Foundation-funded Sustainable Rain project.  Come help create a rain garden in West Seattle this Saturday, July 30, from 10:00 am to 2:00 pm at 5902 SW California Avenue SW, near corner of SW Juneau St.

Come help create this garden at a business/residence, protect the Puget Sound, and support sustainable businesses. Come for as long as you can, meet great folks, and learn about rain gardens.

Bring shovel (if you have), gloves, and water to drink. Bring kids if you can supervise them.

The Nature Consortium is seeking volunteers on a regular basis for Urban Forest Restoration in the Duwamish Greenbelt.

The work parties meet every Tuesday, Thursday and Saturday from 10:00 am to 2:00 pm in the West Duwamish Greenbelt in West Seattle, locations within the greenbelt vary, but you can get directions to the work party location for a particular day by RSVP-ing to the sign-up page on their website – http://www.naturec.org/volunteer/

The West Duwamish Greenbelt is the largest contiguous forest in the city of Seattle, stretching from West Seattle to Burien. It includes 182 acres of park land and another 300 acres in privately owned land.

Foxes, red-legged frogs, hawks, and bald eagles are found within the greenbelt. Each work party begins with a short informal forest ecology workshop, and we spend the remainder of the time performing various restoration activities, including planting native trees and shrubs, removing invasive species, mulching previously-planted areas, and more.

To connect art into this project we hire local musicians to perform in the woods during many work parties.

Also checkout out the Nature Consortium’s web at www.naturec.org

People for Puget Sound, a non-profit group working to protect and restore the health of Puget Sound and the Northwest Straits through education and action, Has organized a rain water tour in West Delridge and Highpoint neighborhoods.

The tour will follow the legacy trail along Longfellow Creek, through the local greenspace, and up the 150 stairs to the High Point neighborhood to view sustainable development solutions to storm water runoff. An optional discussion will conclude the event.

If you are interested in participating please contact People for Puget Sound intern, Emily Fales at emfales@uw.edu.

To commemorate the establishment of Seward Park in 1911, neighbors and community organizations are holding a historical festival on July 16 -17 to acknowledge 100 years of history and celebrate all that the park now offers.

Highlights for Saturday include a costumed Promenade around the perimeter of the park, Classic Car Parade and Show, historic hydroplanes on display, a vintage fashion show, food vendors and live music – all of which have a place in the park’s history. Spectators may especially appreciate the appearance of a 1911 Baker electric car.

In remembrance of the wildly popular annual Rainier District Pow Wow that ran from 1934-1991, the family of the late legislator John L. O’Brien (“Mr. Pow Wow”), will sponsor a pie-eating contest and other old-fashioned games in his honor. Locally renowned comedian John Keister will emcee the contests and games, and one of the judges will be Seattle City Councilmember Tim Burgess.

In 1911, the City of Seattle bought the 277-acre Bailey Peninsula on the western shore of Lake Washington. When first suggested – almost 20 years previous – some felt that the site was too far from town. Optimists, however, correctly anticipated Seattle’s growth.

Due to this forethought and lucky happenstance that left the peninsula unlogged, Seward Park is now one of the city’s favorite parks, boasting some of the oldest and largest trees in the city. It stands as a vital part of south Seattle’s past and present, as well as being an ecological hotspot.

The festival on July 16 -17 will feature additional draws honoring the park’s 20th century cultural history. A two-mile “Promenade around the Peninsula” will commence at 10 a.m. on Saturday. Participants are encouraged to dress in period wear from 1911 to present. Organizers hope to see a range of costumes represented – everything from 1920s flapper dresses, to dapper 1940s suits, to Japanese-American summer yukatas, to 1990s teen grunge-wear is welcome. Commemorative tee-shirts and posters will be available for purchase. Promenade pre-registration at sewardparkcentennial.org is encouraged but not required.

Walkers will be followed by a parade of classic cars returning to the lakeshore loop after a 40-year hiatus. (The loop was closed to car traffic in the 1970s.) After this one-time only circuit, the cars will be on display through Saturday afternoon at the parking area at the top of the park. Although driving on the loop, drag races, and power boats races in Seward Park’s Andrews Bay are now only a memory, historic hydroplanes from the nation’s only hydroplane museum will also be on display on Saturday to recall these old pastimes, including 951 Slo Mo Shun, 1968 Miss Budweiser, and 1975 Oh Boy! Oberto.

The mainstage will feature live performances between 11 a.m. – 5 p.m., including music by Karin Blaine (folk/indie), Four on Six (jazz), The Garage Band (classic rock), and Latigo Lace (Top 40 Country/Rock), and a vintage fashion show at noon. At 12:30 p.m., 40 lucky participants picked by raffle will have the opportunity to participate in a classic mid-century style pie-eating contest, with comedian John Keister as emcee.

On Sunday July 17, Friends of Seward Park presents a Garden and History Tour from 1 – 4 p.m. This self-guided tour begins at Seward Park, and includes private and public gardens and sites of historic interest in Hillman and Columbia City. Tickets are $10 in advance (at www.sewardparkcentennial.org) or $15 on the day of the Tour, with proceeds helping to support Seward Park Centennial events.